What Does An Apology Mean? 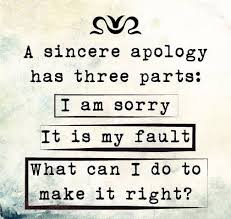 What does an apology mean? Does it come from the heart?  Is it sincere? Is the person apologising making amends in some way? Well not always. 2018 has the energy of 11/2 and that concerns matters of the heart and our authenticity as a person. Overall, this energy is pushing us to be more heart connected in everything that we do and feel. Learning to love ourselves, unconditionally love others, really feeling a sense of injustice about wrong doings in this world and being more real, sincere, introspective and accountable for our behaviours. Making an apology should be making a statement about our regret, accountability and sincerity about a matter that has offended a person or persons but often in the public arena it is not.

In the dictionary an apology is a written or spoken expression of one’s regret, remorse, or sorrow for having insulted, failed, injured, or wronged another. In other words, an apology should be felt from the heart. A heartfelt apology should involve a change in behavior for the better and that person is making amends.

Apologies are made in the media, political, celebrity and justice areas a lot. Numerous apologies from Mark Zuckerman over the sharing of Facebook data, apologies from the previous Minister of civil aviation, Phil Twyford for making a phone call in a moving aero plane, people apologizing for killing another person and the latest is Morgan Freeman for inappropriate sexual remarks made to a woman. And the list goes on and on and… Sometimes I feel people apologize to get themselves out of the hot water but are not really taking responsibility for their wrong doing. It’s a false reality and security and we can all get sucked and lured into this.

Here’s some of my thoughts of what an apology can mean to some people. I must say I do hear many sincere heart felt apologies but sometimes apologies made by people are beyond a joke.

So next time you hear a politician, celebrity or someone in the media making an apology ask yourself is this person being sincere?  Does this person want to make amends and be accountable for his/her behavior? If the answer is no then that person is not being true to themselves or anyone else. Awareness is the beginning of change. The more each of us becomes accountable for our own behaviour and makes others aware of theirs, then the more it becomes part of the collective consciousness.