The Angel Of Mons 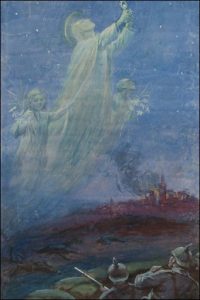 My grandfather served as an infantry man in World War one. He hardly spoke about what happened in the war but what he told me when I was a child was very eerie and chilling. He talked about when he fought in the Battle of Mons in the outset of the war. He said that when they thought they were going to be overrun by the germans it suddenly went quiet. He looked up into the sky and saw the biggest Angel that completely hung over the battle ground. He said he could see its face looking down. He said he felt like it was protecting them. By the grace of God they were saved. The germans had retreated and his Battalion were safe.

‘Some Tommies swore it had been St. George, the warrior saint of England. Others said it might have been St. Michael, since he carried a gleaming sword. A few said they couldn’t tell, but it had definitely been an angel, maybe more than one. Some men were sure they had seen three wonderful, tall figures towering above the smoke and dust of the battlefield. For others it had been a brilliant light, a golden aura against a brilliant sky, or a cloud in which indistinct but heroic figures had come and gone, aided by phantom archers from the olden days of the English warrior-kings. Whatever it was, the soldiers agreed, it had saved their lives. No amount of civilian scoffing would ever change that.’ (Warfare history Network, 2015)

Lest we forget
Psychic Suzanne